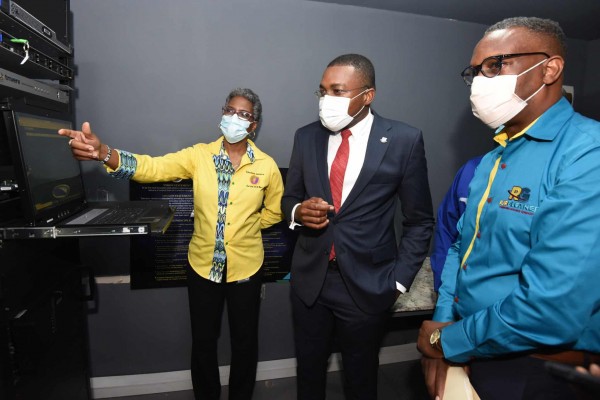 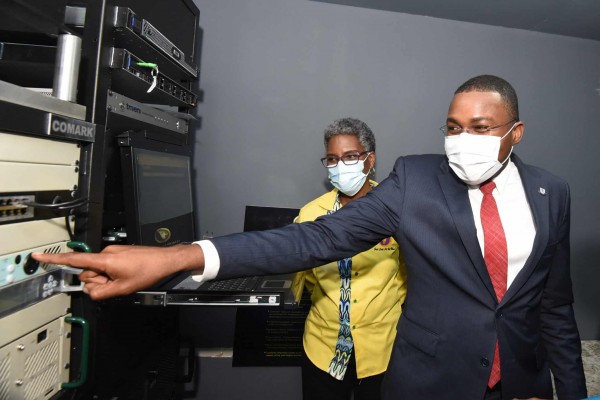 (Claire Grant, General Manager, Radio and Television Jamaica (left) along with Michael Henlin Chief Technology Officer (right) explain the operations of the new ATSC 3.0 transmission system to the Hon. Robert Morgan, Minister with responsibility for Information in the Office of the Prime Minister. This first ATSC 3.0. transmitter site for Television Jamaica was officially switched-on January 31, 2022, at 6:35 pm at its Lyndhurst Road home)

In a switching on ceremony at its Lyndhurst Broadcasting House facility, the new Minister with responsibility for Information, Hon. Robert Morgan officially switched on the TVJ NextGen service just after 6.30pm local time.

Jamaica joins South Korea and the United States of America in the adoption and transmission of an ATSC 3.0 digital terrestrial television service.  TVJ commissioned the service into action in keeping with the government’s announcement last year that the switch over process should commence by local broadcasters by January 2022.

The station says it worked hard to meet that timeline and achieving it showed its commitment to a digitally driven future in its broadcast business.  TVJ says it will now make available FREE to consumers, TVJ, TVJ Sports Network, Reggae Entertainment Television and Jamaica News Network, with the Public Broadcasting Corporation of Jamaica to be added shortly.

Minister Morgan expressed delight with the major investment that TVJ, a member of the RJRGLEANER Communications Group has made in upgrading to a full High Definition transmission format and the embracing of the digital standard recommended by regulators and announced as the policy position of the government.

“What TVJ and the RJRGLEANER group have done is not only invested in its own business, but it has invested in the digital future of Jamaica…I am impressed with the commitment shown to making government policy a reality”, Minister Morgan said.

(On January 31, 2022, at 6:35 pm the Hon. Robert Morgan, Minister with responsibility for Information in the Office of the Prime Minister (right) officially switches on Jamaica’s first ATSC 3.0 transmitter site at Television Jamaica’s Lyndhurst Road home. Looking on is TVJ General Manager Claire Grant.)

Noting that the installation was conducted by an all-Jamaican engineering team on the ground, the Minister said it also showed that Jamaica has the capability to give strong leadership in the digital world.

“Our policy approach has not been to keep up with what is happening with the technology but to leap-frog current technology and provide leadership in this area”, he said.

TVJ’s General Manager, Mrs. Claire Grant said she and the TVJ team members were excited to be a part of this history making activity which ushers in the newest global television technology with the most significant technological changes in almost half a century.

“Both picture and sound will be the best that television has ever had; TV service will be available on some mobile devices without needing data; advertising can be targeted to specific areas and viewership figures can be received in almost realtime; emergency warning messages will be embedded and through their home antenna consumers will get multiple channels free of charge”, she said.  “Importantly, we will be able to provide even more FREE platforms for rich, relevant home grown content,” she added.

Gary Allen, Chief Executive Officer of the RJRGLEANER Communications Group, of which TVJ is a member says the commitment to this process in dollar terms will be approximately US$12 million, with more than a half of that spent up to the point of commissioning the first transmitter into operation in Kingston.

He said that it has been a significant effort on the part of many professionals to get to this point.  “We have to give kudos to our regulators, the Broadcasting Commission of Jamaica and the Spectrum Management Authority, who at the highest levels have been supportive and enabling in getting to this point” Mr Allen said.

The group’s Chief Technology Officer, Michael Henlin, leader of the all-Jamaican team responsible for the on the ground installation of the first ATSC 3.0 site in the Caribbean, said “the exemplary work from the engineering, technology, production teams with support from management and our Board of Directors has been critical to the execution of this historic switch.”

TVJ, which in December became an official member of ATSC Inc, has commenced consultations with US and South Korean experts, as well as with local television set retailers, advertisers and other stakeholders on the next steps, which will see up to twenty (20) similar transmission sites being commissioned into service, to achieve the 95% coverage of Jamaica that is targeted.