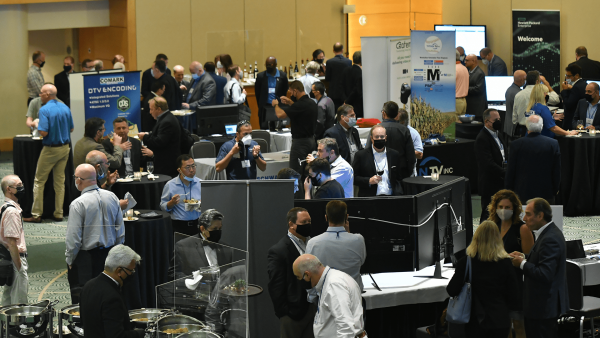 In a hybrid in-person/virtual, two-day conference, ATSC celebrated 43 U.S. markets with NextGen TV on the air and dozens more soon to follow as well as successes in datacasting and auto data delivery trials. Among the panels was one on successful trials of 3.0 data delivery to automobiles in Phoenix and Santa Barbara, Calif., conducted by Sony in conjunction with Pearl TV and the News-Press Gazette group.


By Glen Dickson | September 2, 2021 | 10:00 a.m. ET.
After taking a break last year due to the COVID-19 pandemic, last week the Advanced Television Systems Committee (ATSC) once again gathered for its annual meeting and conference in Washington, D.C., to discuss the current state of the ATSC 3.0 standard and its future prospects.

The format of the two-day “NextGen Broadcast Conference” was different from previous editions, with the first day on Aug. 25 designated as a members-only annual meeting and the second day serving as a conference open to the media and other third parties. With the pandemic still very much a reality, a virtual streaming option was also offered for those unable, or unwilling, to travel to the event and adhere to current CDC guidelines, which required wearing a mask except when eating, drinking or speaking on stage.

Some 90-odd attendees chose the virtual option. But more than 190 people attended in person, including FCC Commissioner Brendan Carr, who in an interview with ATSC President Madeleine Noland described 3.0 as a “disruptive” technology that gives broadcasters “a real opportunity to compete in video on phones.”

While the 2018 and 2019 conferences were dominated by nuts-and-bolts discussions of what broadcasters needed to do to launch early 3.0 stations, the 2021 event had a different tone. There was a celebration of the progress 3.0 has made, with 43 markets on-air and dozens more slated to launch by year end, and some 70 consumer TV models with NextGen TV capability now available.

Several speakers cited updated NextGenTV sales forecasts from the Consumer Technology Association (CTA), which in January 2021 said that about 800,000 NextGenTV sets would be sold this year but in July revised that forecast to more than 2 million NextGen TV units. CTA also projects that 25% of TV sales will be NextGenTV-capable in 2023, 50% in 2024 and 73% in 2025.

Some of the near-term bump in NextGenTV numbers could be a function of the strained global supply chain for semiconductor chips and other key electronic components. A reduced volume of available chips has prompted TV set makers, as well as smartphone manufacturers, to focus on their high-end, higher-margin products. But while many NextGenTV sets continue to be premium 4K and 8K models, there are also more affordable options such as 43-inch set from Sony that retails for $599.

In fact, all 40 of Sony’s 2021 TV models have NextGen TV capability, said Nick Cosley, VP, business development for Sony Electronics, as Sony looks to achieve economies of scale by designing the same fundamental capabilities into all of its TVs.

“We’ve been looking at when is the right time for ATSC 3.0 to be mass market, and we think that time is now,” Colsey said.

SpectraRep, which works with public broadcasters to lease access to their spectrum for nontraditional uses, has enabled datacasting with ATSC 1.0 for the past 20 years, noted President and CTO Mark O’Brien. But he said the power of broadcast for data delivery has really been proven in the past 18 months as a way to provide distance learning for children who don’t have access to broadband at home.

SpectraRep has deployed more than 10,000 DigiCAP receivers with both ATSC 1.0 and 3.0 receivers to students’ homes in Indiana and several other states as part of its “EduCast” service. The DigiCAP units receive secure 1.0 datacasts of educational content including live video and assignments with a simple antenna, and then retransmit it in the home over WiFi to Chromebooks or PCs.

“Now that is our foot in the door for ATSC 3.0, for the technology that ATSC 3.0 brings that takes datacasting to a whole new level with SFNs and deeper building penetration, ease of reception, more capacity, mobile reception and other things we can’t do today,” O’Brien said. “We have one hand tied behind our back with ATSC 1.0 datacasting, and yet we were still able to prove that there’s a need out there in the world.”

There was also a panel on successful trials of 3.0 data delivery to automobiles in Phoenix and Santa Barbara, Calif., conducted by Sony in conjunction with Pearl TV and the News-Press Gazette group. Sony’s semiconductor business has already been active with automotive applications in Japan and has learned that having multiple demodulators on a receiver chip to aggregate signals from diverse antennas greatly improves reception.

The testing in Phoenix and Santa Barbara involved dedicating a single PLP (Physical Layer Pipe) within a 3.0 broadcast to an automotive data service alongside another PLP carrying the stations’ 1.0 service. The automotive PLP was set to operate at a very robust signal to noise ratio of 5 dB, while the higher-bit-rate standard PLP was set to operate at a less robust 15 dB SNR. Then the testers drove around both markets with in-car 3.0 receivers to gauge reception.

Luke Fay, senior manager, technical standards for Home Entertainment and Sound Products, said the results were “very, very impressive,” particularly in Phoenix, where the in-car receivers were able to pick up a strong signal on the backside of several mountains and even halfway through a long freeway tunnel.

Testing in Santa Barbara also went well, proving the ability to transmit non-real time files as well as media streaming for auto applications such as fleet management or software updates. Using only a 15 kW transmitter, the Santa Barbara testing showed good reception up to 40 miles, even in a mountainous area with thick tree cover where LTE reception on a cellphone wasn’t available.

“The physical delivery of files should not be questioned,” Fay said. “It’s robust, it’s possible, and you can do it.”

“I was pleasantly surprised at just how well the RF worked,” Foster said. “It reminded me of FM radio, you turn on your FM radio and it works everywhere. This was the same kind of feeling, except we had high-definition video everywhere.”

Foster planned to visit broadcasters’ Motown 3.0 Test Track in Detroit to study packet loss more carefully and perform more drive testing. His company, which makes a highly integrated telematics control unit (TCU), wants to talk to automakers about the benefits of 3.0 in the broader connected car ecosystem, which to date has relied on cellular connections.

“It’s complementary in a very powerful way,” Foster said. “There’s common information, whether it’s automotive software or trending content, that really needs to be offloaded from expensive unicast pipes and broadcast one to many. It will bring the cost down by a significant amount and decongest the unicast connections. So, it’s at least a two-fold benefit.”

“2022 will really be a big year, where you’ll be able to see use cases in action, with true delivery to cars in fleets,” Schelle said. “I think the aftermarket is going to kick off as well.”