GETTING READY FOR NEXTGEN TV 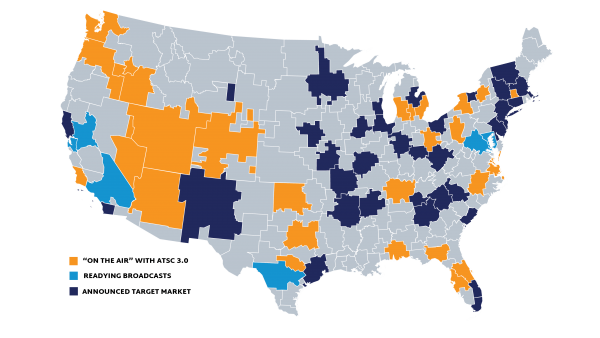 As deployments ramp up, now is the time to prepare

ALEXANDRIA, Va.—As pandemic-driven restrictions start to ease around the country, U.S. broadcasters are increasing their focus on rolling out ATSC 3.0 (aka NextGen TV).

Despite some hurdles imposed by Covid-19, more than two dozen stations over the past year have transitioned, and interest among others is growing.

In this, the first installment of a two-part article, we explore what it takes to put a 3.0 signal on the air, with information supplied by several broadcasters and equipment suppliers.

All agreed that while the first step (coordination among stations within a market) is non-technical, it will require a substantial amount of time spent in meetings to hammer out details and agreements as to which station will carry off-loaded ATSC 1.0 streams from those moving to 3.0, and details of the hosting of those station’s 3.0 transmissions.

As for the equipment needed, the old days of using specialized hardware to process and distribute content are long over.

“It’s all about the software,” said Dave Folsom, engineering consultant to the Pearl TV group, and someone who’s accumulated a wealth of information on transmission and reception of ATSC 3.0 through his work in the Phoenix Model Market project.  “Everything is generally running on off-the-shelf servers.”

“To put an ATSC 3.0 signal on the air, you need encoding, signaling guide service equipment and a scheduler gateway that coordinates multiplexing of all of the signals involved,” he said, explaining that all of these functions are handled by server-based virtual machines and noting that manufacturers of 3.0-related broadcast products are chiefly software developers.

“This approach allows the software to be hardware-agnostic,” Folsom added. “The trick in developing software [is that it] must be portable. ‘Hardware’ failure takes on a whole new meaning with ATSC 3.0, as at a given installation this software may be running on one, two or three separate servers.”

Folsom observed that while manufacturers of 3.0 software may provide the server hardware, they don’t necessarily manufacture such devices.

“Each manufacturer preconfigures their own server or specifies a server and will configure it for you,” he said. “These are usually HP and Dell servers; however, these servers are not unique.”

He added that NextGen adopters may even want to consider taking things a step further by harnessing the power of cloud hosting.

“These logical services could all be up in the cloud,” he said. “They are in a virtual machine environment. Software manufacturers are generally ready for cloud implementation. By putting software in the cloud, they don’t encounter boundaries such as [a limitation on] the number of computational threads, speed of storage, or the amount of virtual memory available.”

Pete Sockett, director of engineering and operations at Raleigh, N.C. WRAL-TV, took 3.0 to the air experimentally in June 2016, and has now racked up some 30,000 hours of experience with this next wave of TV broadcasting. Sockett, along with Matt Brandes, manager of RF and transmission and Mike Mory, senior design engineer at WRAL, were asked about the most important items for converting to ATSC 3.0.

The trio agreed that patience was high on the list, since transmitting and receiving ATSC 3.0 has moved through a number of iterations since it was standardized. Brandes added that “other than the necessary equipment, a sense of humor is essential, as there will be surprises.”

They all stressed that education is a big component in moving to NextGenTV.

“Read the [ATSC’s} RF standards and recommended practices, along with A331-220-Signaling-Delivery,” said Sockett. “Understanding the little pieces makes all the difference in understanding the system. This is a whole new way of thinking. You’re not going to be successful by simply stumbling through it.”

Mory echoed this, stating it’s essential to “learn the concept of ATSC 3 instead of how to simply ‘operate the boxes.’”

Another broadcaster with 3.0 on the air is Todd Achilles, co-founder, president and chief executive officer at Evoca TV, which operates several low-power TV stations in the Northwest. He took two of these to NextGen TV status in June 2019.

“We basically redesigned stations,” Achilles said. “We changed antennas, going to a full CP pattern. We also swapped out the 1.0 transmitters for 3.0 transmitters.” He added that the 3.0 stations, which are located in Idaho, follow a “hub and spoke” model, with fiber interconnections to a data center in Denver where content is ingested and then passed through a router and gateway to the transmitter sites hundreds of miles away.

While he’s happy with the NextGen TV move, Achilles admits that getting there was no piece of cake.

“We were super early in getting 3.0 service on the air,” he said, observing that the Idaho stations became the fourth and fifth in the country to join 3.0 ranks. “There were many bugs to contend with. We worked through a lot of software issues with a really great group of suppliers. Everyone involved worked with us [in clearing up the problems].”

Achilles noted that Evoca is providing its viewers with the full hybrid OTA/broadband 3.0 delivery experience by providing them with a specially designed set-top box, the Evoca Scout.

Sinclair Broadcast Group has a very large (and rapidly expanding) list of NextGen TV stations now on the air in 15 markets. Ian Hoots, SBG’s director of NextGen development in their ONE Media 3.0 division, said that the first step to consider in moving to 3.0 is a revamping of the transmission chain.

“You’re going from MPEG-2 to HEVC; you’ll need to upgrade or replace older encoders,” said Hoots, reiterating Folsom’s remarks about the need for installation of signaling, packager, and scheduler/gateway servers to get the signal ready for transmission.

He noted also that in moving to 3.0, broadcasters should critically examine—and make changes if necessary—to data handling at remotely located transmitter sites.

“You need to think about adding a network switch at the transmitter site and folding this in as part of the company IP space,” he said, observing that while IP delivery may be available at a transmitter, it often exists as an isolated “wild west” island.

Hoots observed that as stations have been operating digitally for more than a decade, most transmitters should be able to handle ATSC 3.0. “After you get the exciter upgrade or replacement out of the way and the transmitter is not too old, you should be OK, however, some tube transmitters may have a bandwidth problem,” he said, adding that “3.0 does squeeze every last drop out of six megahertz.”

ATSC’s choice for the audio standard in the U.S. is Dolby’s AC-4 codec. Mathias Bendull, vice president of living room audio for Dolby, commented on the importance of the audio component, citing a recent Magid consumer survey on 3.0.

“The study found that ATSC 3.0 had an influence on new TV purchase decisions and that consumers are very excited about its benefits, with improved audio ranking very high—like dialog intelligibility, which is enhanced with Voice+, and Dolby Atmos,” he said. The company has worked closely with Phoenix Model Market participants and others launching NextGen TV to fine tune Dolby’s technology to best suit the needs of broadcasters, he added.

“Through this collective work, we have been able to design our tools to offer maximum agility to broadcasters so that they can deploy ATSC 3.0 as they choose—i.e. autonomously or in partnership with us,” he said.

Tools are also available to monitor and troubleshoot ATSC 3.0 streams, according to Brick Eksten, CEO of Qligent.

“From a monitoring perspective [3.0] introduces new challenges, but the technologies and standards being used for data carriage on ATSC 3.0 are not new,” he said. “They are just being leveraged in a new way, and combined with a technical advantage through the unique capabilities of terrestrial broadcast systems.”

WHAT ARE YOU WAITING FOR?

Since 3.0 is still relatively new, skeptics may ask if all of the bits and pieces—and vendor support—necessary for moving to NextGen TV broadcasting are available right now.

Bill Robertson, vice president of business development of Digital Alert Systems, which is a member of the NextGen Video Information Systems Alliance (NVISA), thinks so, stating that a number of companies have invested quite heavily in producing products for the new DTV standard.

“Support of 3.0 in the station environment is there,” he said. “Everything the broadcaster needs to deploy ATSC 3.0 effectively is on the market now. Our membership represents a large core of what’s needed to deploy ATSC 3.0 today.”

In part 2, we’ll highlight the suppliers of the equipment and services broadcasters will need to implement ATSC 3.0.